Tickets: $23 Student/Senior, $25 General, $30 at the Gate Children 9 & under are free. Please call to reserve a youth ticket – 607.326.7908 Proof of COVID-19 vaccination or a negative COVID-19 test required to attend. You can’t keep this autumn tradition in the Catskills down! The first snap of autumn, the vibrant colors on the mountainside, and the scent of harvest means its time for FIDDLERS! We are thrilled to welcome several exceptional musicians to this year’s event where we celebrate the tradition of fiddling.

Schedule for the day: 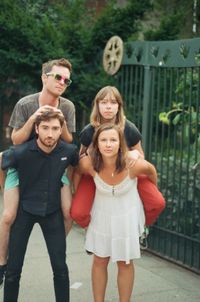 We will have concerts instead of dances on Friday and Saturday nights, presuming that not everyone will be ready to hold hands with 100 people. Concerts will be BYO chairs, under and around the big tent. We hope to see you there!

The Friday night concert will feature Rich Hartness and Tolly Tollefson followed by The Onlies. Saturday’s show will feature Vivian Leva and Riley Calcagno followed by Hard Drive! Both nights will be definitely worth busting up your jam to come listen.

This high-energy quartet of young instrumentalists and singers performs together as a stringband. The band members, who grew up playing fiddles, guitars, and banjos in their hometowns of Seattle, WA and Lexington, VA, dig deep into traditional American popular (old-time) music, but perform with a pulsating drive, sharp arrangements, and rich vibration that resound with the present.

The Onlies on the Bronson Green

The Onlies are a young group of old friends who perform together in a stringband. They grew up playing fiddles, guitars, and banjos in their hometowns of Seattle, WA and Lexington, VA. With their latest self-titled recording, the band digs deep into performances of traditional American popular (old time) music. The music moves with a pulsating drive, sharp arrangements, and rich vibration — it resounds with the present.

The band, all still in their early twenties, won first place at the Clifftop Appalachian Stringband Festival in 2017, has toured the US extensively, and has performed and collaborated with Bruce Molsky, Elvis Costello, Tatiana Hargreaves, Foghorn Stringband, The Bee Eaters, John Herrmann & Meredith McIntosh, and Darol Anger, among others. Their new record is produced by Caleb Klauder (Foghorn Stringband, Caleb Klauder Country Band), and features Nokosee Fields (Western Centuries, Steam Machine) on bass. It is a committed engagement with the histories and futures of old time fiddle music.

These kids represent the future of Old. Old time music that is! Catch them on the Bronson Green for a fun Sunday afternoon for some blazing fiddles, rhythm guitars and plunking banjos. Excited to welcome them for their first show in Peninsula.

Sami Braman, Riley Calcagno, and Leo Shannon started as a trio at age 7 in Seattle and it eventually morphed into The Onlies. Vivian Leva joined the group four years ago and the richness of their sound became even more polished. Now, just barely past twenty-one The Onlies are a seasoned and tight band focusing upon old-time string music and absorbing influences from The Carter Family to Townes Van Zandt to Bob Dylan. (Riverdog regulars will recognize Riley and Vivian from their previous appearances here. They have received critical acclaim recently as a duo and will return in September to perform new original music.) Riley has long wanted to bring the band he co-founded fifteen years ago to Riverdog and now it is going to happen.